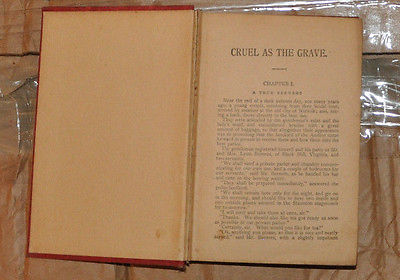 “There is some advantage in having imagination, since that visionary faculty opens the mental eyes to facts that more practical and duller intellects could never see.”

While on vacation in Boise, Idaho, I stopped by an antique store in the Hyde Park section. I wander antique stores when I am feeling nostalgic for the past. At my age, some of the items I found were items I’d had as a child.

Perfume bottles from Avon®, Gunni-Sax® dresses, and huge leather purses with a mountain scene and initials. I had to laugh at myself when I saw a clown that I remember having when I was around three. I even have a picture of me holding it. Nostalgia.

As I wandered through the store, I found a stash of books, all written over one hundred years ago. I immediately picked one up titled, The High Priestess, and opened the cover. Inside was a note that read: To Jess, X-mas – 1915. Love, Jack and Marge. The cost—one dollar and twenty-five cents and the cover was an immaculate red cloth with perforated pages.

Insight as to how we conversed and processed information. Values and turmoil from an era I can only witness through the author’s words.

My curiosity over humans of the past started with Nathaniel Hawthorne’s The Scarlet Letter. Call me naeve but I never imagined the conflict one would have living in Puritan times while thinking in a very different manner. Clearly Hawthorne had witnessed the battle between good and evil continuously challenging us. I used to wonder what he was trying to convey; was he on the side of the Puritans or Hester Prinn? Did he despise the minister? Or blame Hester’s husband? Lastly, I could see into the eyes of someone who witnessed that era and the paradoxes of the time.

Next, I picked up Cruel as the Grave, by Mrs. E.D.E.N. Southworth and was instantly smitten by the author. She passed away in 1899 right before this novel was published. I read the first few pages and I wanted to know more of the protagonist and her struggles written at the turn of the twentieth century.

These books are history books to me. All we can do today is create a theory from the writings and news of those times. I want more than that, I want to see from the author’s eyes—through fiction—the attitudes, emotions, and values of another period in time. To hear about the lives of everyday people from their own point of view.

Did Mrs. Southworth ever wonder if a woman in 2016 would be reading her book written before 1900?

Knowledge is truly timeless. No book is ever written in vain; sometimes it is just written for people whose time has not yet come.